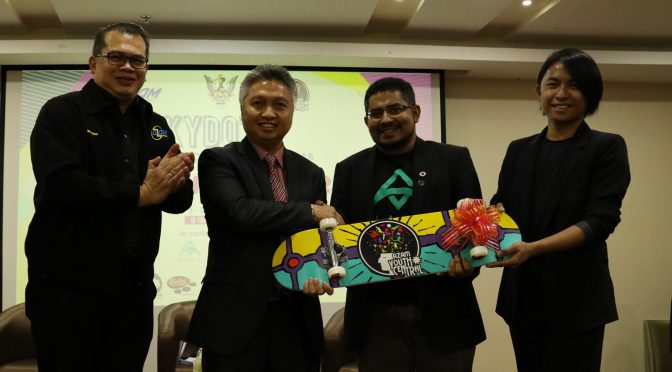 KUCHING, November 9: Youth startups and creatives should be bold to put themselves out there to get market exposure and take advantage of available programmes for entrepreneurs and digital businesses.

In an interactive session with Assistant Youth and Sports Minister Datuk Snowdan Lawan during the first day of Kuching Youth Day Out 2018 (KYDO) themed “The Power of Leverage: How Youths Could Initiate and Inspire Change to Society and Government”, he spoke on the opportunities and challenges that face the youth group in urban and rural areas in the entrepreneurship and digital economy sectors.

“Now Sarawak has become a center for business people to come. The Peninsular Malaysia market has become too crowded. For those who are farsighted, they can see Sarawak as ‘lubok rezeki’ and the West Malaysian businessmen want to open up businesses here and do joint ventures with Sarawakians,” said Snowdan, who officiated the two-day youth programme from 9-10 November organised by Angkatan Zaman Mansang (AZAM) Sarawak and youth volunteer group AZAM Young Souls.

In his opening speech, Snowdan commended KYDO for being in line with the state government’s aspirations to hold more creative and dynamic events to engage and inspire the younger generations as key stakeholders and partners in our development agenda.

“Events such as this, which take into consideration, very current trends, opportunities and challenges, are ideal platforms to nurture future leaders; leaders who are knowledgeable, innovative, dare to take risks, embrace high integrity, inclusive and visionary.”

The purpose of the Ngopi Ngeteh 2.0 portion of KYDO is to spark brainstorming and discussions among the youth groups, including on the best way to implement digital initiatives in various economic and socio-economic sectors within local communities.

“The youth have the opportunity to support development in many anchor sectors in Sarawak’s Digital Economy Strategy, which include but are not limited to, E-Commerce, Social, Tourism and even Agriculture.”

The objectives of the programme are to bring together Kuching youths from diverse backgrounds and interests to converse, perform and play together as part of a healthy lifestyle and social interaction, to get local youths to talk about current social and economic trends with a view to encourage the younger generations to contribute ideas and recommendations on moving forward; and to help provide a stronger unified front for the youths to be heard, to be engaged and included in the state’s development process.

It is hoped that this programme will drive youth development for Kuching and, Sarawak as a whole, to the next level, capitalising on Sarawak’s own unique gifts and strengths. 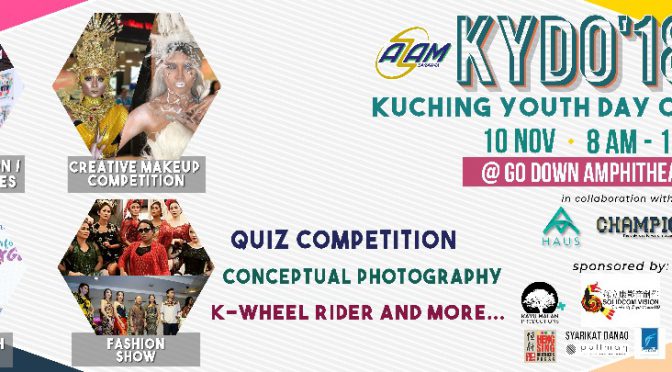 KUCHING: Over the last five years Kuching city has seen the exciting emergence of various youth outfits centring on career, the arts and culture, building communities, carrying out community service in the form of volunteerism, social consciousness and modern and innovative enterprise – a trend not seen before.

To carry forward this momentum Angkatan Zaman Mansang (AZAM) Sarawak and youth volunteer group AZAM Young Souls are providing a platform to bring together these diverse groups to interact, synergise, and produce ideas on future efforts through their youth programme Kuching Youth Day Out 2018 (KYDO’18), a two-day event from 9-10 November 2018.

END_OF_DOCUMENT_TOKEN_TO_BE_REPLACED 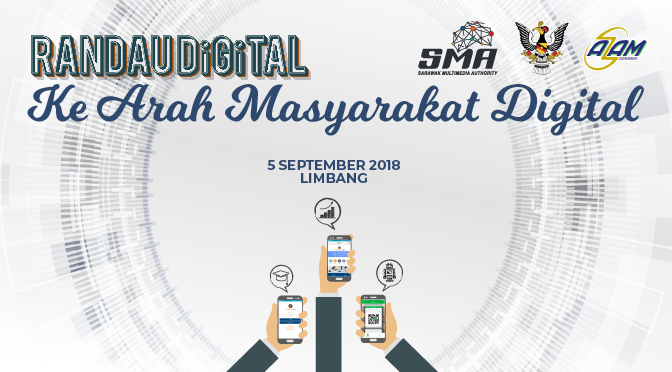 KUCHING: Advancements in digital and communication technologies are fast-transforming the global economic landscape and Sarawak will not be left out in this digital revolution. In its efforts to ensure that Sarawakian communities are well-equipped to participate in this new economy, various initiatives have been carried out by the state government to ensure digital inclusivity.

END_OF_DOCUMENT_TOKEN_TO_BE_REPLACED 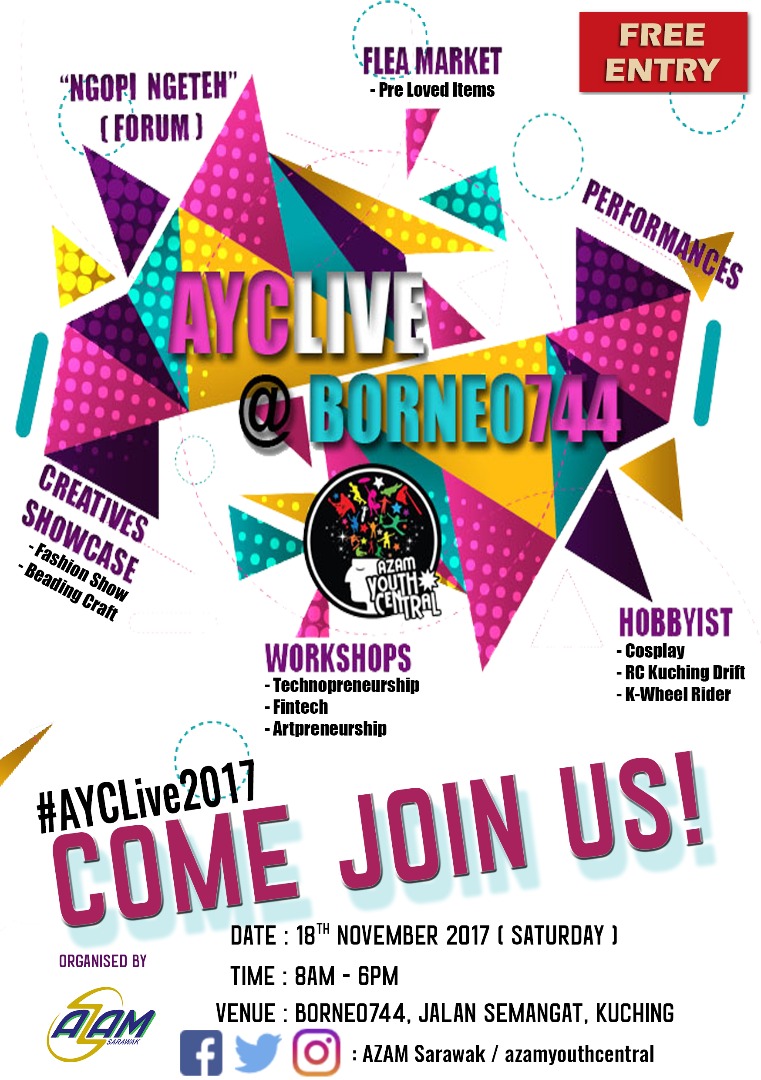 Free and open to the public, AYCLive@Borneo744 will be a one day event starting from 8am to 6pm. AYCLive is AZAM Sarawak’s signature youth event that combines artistic and recreational activities with programmes that promotes personal and professional growth among the youth.

Come and be entertained with musical performances by At Adau, Soundholic, Foxgloves and modern dance by University Malaysia Sarawak (Unimas). Watch out for the fashion show staged by Limkokwing Borneo which will also see At Adau performing.

END_OF_DOCUMENT_TOKEN_TO_BE_REPLACED

The year 2014 has been another eventful year for AZAM.

In his Statement published in the 2014 Annual Report, AZAM’s Chairman, Tan Sri Datuk Amar Haji Mohamad Morshidi Abdul Ghani said AZAM was a key collaborator in some of the state’s seminars such as those on “Socially and Culturally Vibrant Cities and Towns” with the Ministry of Local Government and Community Development.

He also said AZAM’s youth development programmes had also seen a steady increase in the number of participation as well as in partnerships with other institutions both local as well from outside Sarawak.

Tan Sri Morshidi said during the year under review, AZAM also introduced new youth activities such as a collaboration with PETRONAS on a Youth Dialogue, which is a rural youth outreach activity to facilitate their interaction with the state’s leaders on development concerns in Sarawak.

AZAM had also continued to work closely with local radio stations and newspapers to disseminate useful information on current development happenings around Sarawak through its radio programme and newspaper development feature articles.

Meanwhile in his remarks at the 32nd Annual General Meeting (AGM) of AZAM held last Saturday in Kuching, Tan Sri Morshidi who is also the State Secretary said if last year’s performance of AZAM was any indication, AZAM looked set to not only enjoy more productive years ahead, but is also well prepared to scale new heights.

He added, one of the highlights in 2014 was the launch of AZAM Online TV, an online video channel via Youtube, which was to help provide fresh and positive images of Sarawak to both local and international audiences. In this digital era, such move was a natural progression in AZAM’s efforts to communicate development information and knowledge quickly and more creatively, to the people of Sarawak and other stakeholders.

Among other things, the AGM agreed with the proposal to introduce a mentorship progamme for the youth members of AZAM aged 21-30, by the senior members. This is primarily to groom the younger members to be future leaders in the organisation, and to work towards a more strategic and coordinated development programme for the youth target groups in Sarawak.

Tan Sri Morshidi called on the senior members of AZAM to volunteer to mentor the youth members to help turn them into highly active volunteers.

On matters raised by members, a former Deputy Chairman of AZAM, Datu Dr. Hatta Bin Solhi suggested that more youths be encouraged to reach out and work with troubled youths.

Another member, Abang Haji Nawawi Abang Drahman said that in addressing problems of substance abuse among youths, those working with such troubled youths must be well trained.

YBhg. Dato William Wei, a board member of AZAM suggested that voluntary efforts should be made to provide more training opportunities for youths who are unemployed or lack job skills, especially by local industries.

AZAM presently has more than 100 members who are accepted based on their commitment to volunteer in capacities such as, members of various working committees, conference speakers, facilitators, or moderators, trainers, writers and judges of competitions.

Youths in Kuching and the surrounding areas are invited to visit or participate in the first edition of the AYCLive@WayangStreet for the year, this March 14 at the AZAM Youth Central (AYC) at Medan Pelita, Kuching.

Organised by AZAM and the AZAM Young Souls volunteers, the one day event will be held from 12.00 noon until 10 p.m. It will present diverse activities showcasing local youths’ talents and interests. These include the regular activities of live performances by local bands, a mini art exhibition, a flea market and dance performances.

The weekend event will also introduce new activities which are, a martial art demonstration including wushu, and an outdoor event – the Street Workout Challenge. Another new activity to be introduced is a “business and sales pitch” competition to help train young entrepreneurs polish their skills in pitching their products or, their business to investors.

Other youth interests which are expected to be showcased during the weekend programme are cosplay from Gendaibu club and yoyo demonstration by Mr. Ryan Han from Yoyo Rangers. The present of card game from NEKO NEKO NYA group will add more spice of this AYCLive@WayangStreet series. This new episode will also welcome our friends from The HUB Youth Centre with the showcase of their own talents.

The AYCLive@WayangStreet series or urban youth events was introduced in January 2014, spearheaded by youth volunteers under AZAM’s youth development and engagement programme. A total of 5 events have been held so far, which were centred at the AZAM Youth Central, housed at Medan Pelita courtesy of the Pelita Holdings Sdn Bhd, on the historic Wayang Street, Kuching.

Under the banner of Young Souls & the City, the weekend activities are to help provide a platform for local youths to congregate, interact and create various useful and creative activities not only for the youth themselves but also for the larger community. The events are also to contribute to making Kuching city more socially and culturally vibrant, and to bring together youths of diverse backgrounds, races and beliefs in efforts to strengthen social harmony in the state.

Youths and members of the public who are interested to find out more about the event may contact AZAM staff, Razali or Nazrie at 082-411799.