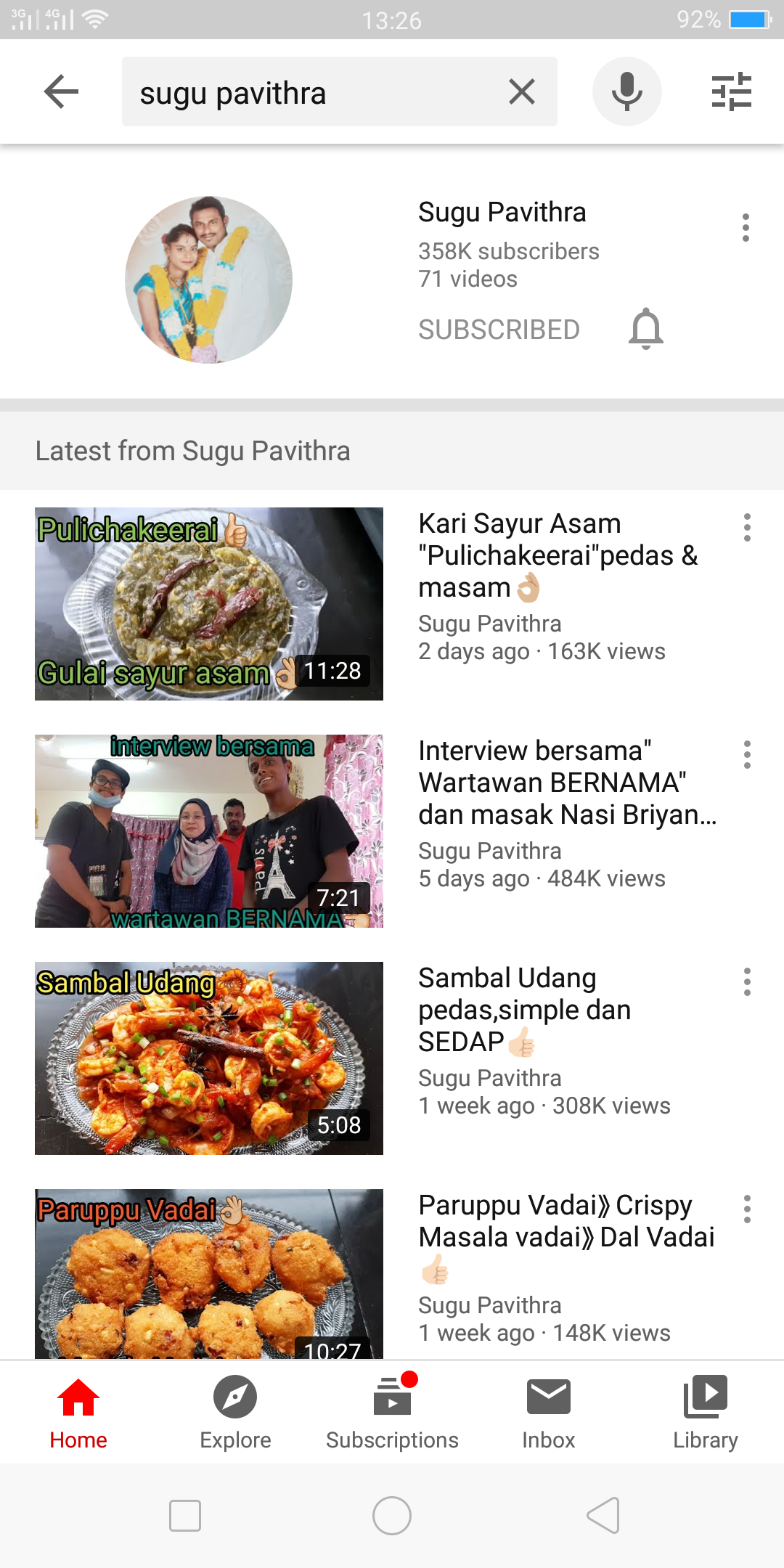 YouTube channel “Sugu Pavithra” may have first begun on Jan 28, 2020, but housewife S. Pavithra, 28, and husband M. Sugu, 29, have already garnered 670,000 subscribers and more than 23 million views for their 80 over cooking videos to date, with the highest viewed being “KARI AYAM PENCEN PALING SEDAP”  with 2.1 million views.

There’s no fancy camera work, only Pavithra’s pleasant voice as she eloquently delivers cooking instructions in fluent Malay as she and her husband prepare Indian fare together before sitting at the end to eat with their two boys.

Within the first four days of uploading their first video, they gained 5,000 subscribers, immediately becoming eligible for the YouTube Partner programme, allowing them to monetize their channel and help them earn an extra side income.

During the movement control order period, their family that resided at the estate where M. Sugu worked at resonated with many viewers who couldn’t travel or go shopping under MCO restrictions, on top of having to make ends meet during the global Covid-19 economic downturn.

Upwards of 25 million Malaysians were on the internet for the year 2019, making influencer marketing essential for startups and businesses hoping to connect with the consumer market.

That being said, the Malaysian content market is still untapped territory, with the highest Malaysian YouTuber racking up to 2 million followers compared to 8 million by a Thai YouTuber.

When asked about what was behind the appeal for “Sugu Pavithra”, YouTuber Cardock (otherwise known as Fadhil Mohamad Isa)  said that what made the husband-wife unique was their sincerity and authenticity, as well as Pavithra’s fluency in Malay which helped her engage with a broader audience.

“It’s as I’ve taught others in my courses before, it’s actually not that complicated; all you need is a YouTube account, just start creating your videos,” said the former TV9 news presenter.

“Be Malaysian,” was the advice from AnyMind Group’s Senior Influencer marketing strategist Bvern Yip to the next generation of influencers hoping to gain popularity and stand out among the 50 million creators on YouTube as of 2020.

She was speaking at the Sarawak SocMed Influencers programme jointly organised by AZAM Sarawak and Sarawak Multimedia Authority in collaboration with Koperasi Belia Inovatif Sarawak (Kobis) in 2019. Themed ‘Influencers with a cause’ the programme is part of the Sarawak government’s effort to promote digital Inclusivity and aimed to instil the first wave of social media influencers with emphasis on creating good and impactful content.

During the programme, Yip pointed out that the popularity and global recognition of Thai adverts and kampung-style cooking shows from Cambodia, Vietnam, China showed that there were no barriers to gaining worldwide viewership.

YouTube content creators like Li Ziqi are proof that this formula works. Tapping from her own background living in rural Sichuan province, she documents her life in the countryside cooking the region’s fresh produce and making her own daily needs like furniture, or even lipstick, using traditional methods and relays it with stunning, tranquil visuals.

Today, this internet celebrity has 50 million subscribers from China, and 8 million from overseas.

The duo behind Mak Cik Bawang Champion Afick Wazai and Fir Affandi are also proof that working the local angle is a winning formula.

Era Sarawak radio deejays Fir and Afick, the men behind the very relatable makciks Kak Aji and Minot, had started making funny content and videos five years before, after meeting each other through radio.

Responding to a challenge by their management to increase their social media followers on Facebook and Instagram four to five years ago, they admitted that initially they didn’t know what video to shoot, but already had a following on radio for their humour and funny on-air content, which they brought into their videos.

They did 4-5 minute skits and then slowly built up the promotion and the engagement through FB and Instagram. Their FB page had more than 4,000 followers at first, and then it jumped to five digits after that.

Even though they hit their five-digit target by the end of the year, they realised that nothing really stuck in people’s minds even though they garnered a few hundred views and shares for their videos. But they weren’t memorable at the time. So they needed to find something that would make them recognised and easy to remember.

The Mak Cik Bawang Champion characters were an idea that came to them at the time while they were in the studio making a video for Era. They found a white fabric in the studio, which they still use to this day, and tapped into the typical Malay ‘makcik’ character, what they usually talked about, their mannerisms.

They filmed, edited and uploaded the 3-minute video (all by phone) at 5pm, and then discovered by the next day that it had reached 100,000 views.

They discovered that the video went viral when a lot of people shared the clip through WhatsApp and how people were describing it, calling it “champion”. They knew that the next video they made had to feature the word “champion”, and that is how their characters, Kak Aji and Minot, became celebrities.

Today Mak Cik Bawang Champion endorses a lot of products, and lot of people have said that their business has increased due to the coverage, which is the role that influencers play.

For those who wonder which way Sugu Pavithra will be going by the end of the year, so far the husband-wife YouTubers have received gifts from Prime Minister Tan Sri Muhyiddin Yassin and a special mention during his speech announcing the Penjana Economic Recovery Plan on June 5.

On June 10, Pavithra and her husband announced that due to the conflict between their flourishing YouTube career and his work on the estate, he would be focusing fulltime on producing content for Sugu Pavithra.