SMA committed to bringing about digital changes in Sarawak 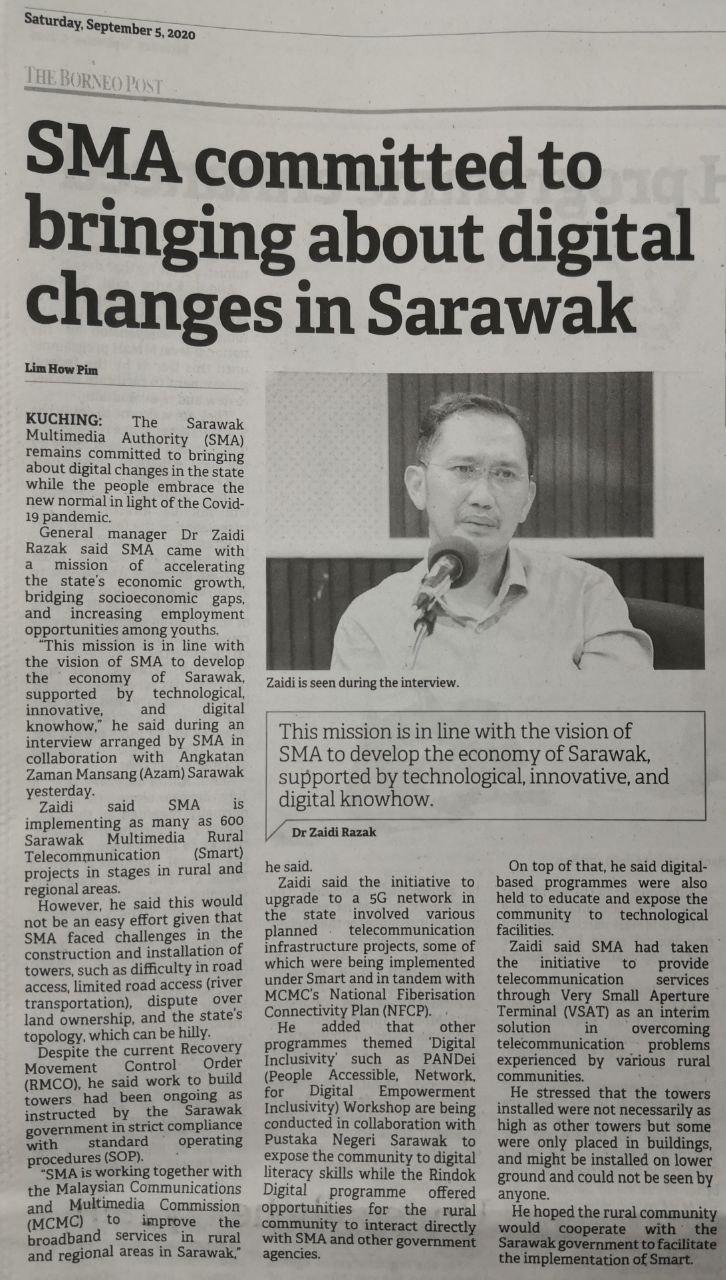 KUCHING: THe Sarawak Multimedia Authority (SMA) remains committed to bringing about digital changes in the state while the people embrace the new normal in light of the Covid-19 pandemic.

“This mission is in line with the vision of SMA to develop the economy of Sarawak, supported by technological, innovative, and digital knowhow,” he said during an interview arranged by SMA in collaboration with Angkatan Zaman Mansang (AZAM) Sarawak yesterday.

ZAidi said SMA is implementing as many as 600 Sarawak Multimedia Rural Telecommunication (SMART) projects in stages in rural and regional areas.

However, he said this would not be an easy effort given that SMA faced challenges in the construction and installation of towers, such as difficulty in road access, limited road access (river transportation), dispute over land ownership, and the state’s topology, which can be hilly.

Despite the current Recovery Movement Control Order (RMCO), he said work to build towers had been ongoing as instructed by the Sarawak government in strict compliance with standard operating procedures (SOP).

“SMA is working together with the Malaysian Communications and Multimedia Commission (MCMC) to improve the broadband services in rural and regional areas in Sarawak,” he said.

Zaidi said the initiative to upgrade to a 5G network in the state involved various planned telecommunication infrastructure projects, some of which were being implemented under SMART and in tandem with MCMC’s National Fiberisation Connectivity Plan (NFCP).

He added that other programmes themed ‘Digital Inclusivity’ such as PANDei )People Accessible, Network, for Digital Empowerment Inclusivity) Workshop are being conducted in collaboration with Pustaka Negeri Sarawak to expose the community to digital literacy skills while the Rindok Digital programme offered opportunities for the rural community to interact directly with SMA and other government agencies.

On top of that, he said digital-based programmes were also held to educate and expose the community to technological facilities.

He stressed that the towers installed were not necessarily as high as other towers but some were only placed in buildings, and might be installed on lower ground and could not be seen by anyone.

Hehoped the rural community would cooperate with the Sarawak government to facilitate the implementation of SMART.